Hydra and Obelia are two genera of small aquatic animals of the phylum Cnidaria, class Hydrozoa.

Hydra is a genus of small diploblastic freshwater animals from the class Hydrozoa. The representatives of the genus are up to 30 mm long.

The Hydra remains a polyp throughout its entire life and does not have a medusa phase. It has a tubular body with radial symmetry. The Hydra lives attached to the bottom substrate via the so-called basal disc (a simple adhesive foot). The basal disk has gland cells, producing a sticky fluid, which aids the attachment. At the free (top) end of the body are located up to twelve thin, mobile, hollow tentacles, surrounding animal’s mouth opening. Each tentacle is covered with highly specialized stinging cells called cnidocytes.

The cnidocytes are explosive cells used for defense from predators and prey capture. Upon contact dart-like thread containing neurotoxins are discharged.

The nervous system of the Hydra is a simple nerve net. The animals from this genus have touch-sensitive nerve cells and photoreceptors located in the body wall and tentacles.

The Hydra does not have specialized organs for respiration and excretion, they occur by diffusion through the entire body surface.

The Hydra is a sessile animal, but it can move by:

Hydra is a predator, feeding mainly on aquatic invertebrates like Daphnia and Cyclops. Obelia is a genus of diploblastic mainly marine animals from the class Hydrozoa. It has both polyp and medusa phases.

The Obelia is a sedentary colonial animal. The colony is attached to the substrate via the so-called hydrorhiza. From the hydrorhiza begins a vertical branching stem called hydrocaulus, on which are located the polyps (feeding and reproductive). Polyps have a tubular body with radial symmetry.

The Obelia is covered by yellow chitin exoskeleton, secreted by the ectoderm.

The feeding polyps are similar to Hydras. At the top of the body is located the mouth, surrounded by about twenty-four tentacles. The tentacles are solid, filled with endodermal cells. The tentacles and the mouth are covered with nematocysts.

The Obelia is a sessile colony and does not move from one place to another. However, its sexual generation, the medusa, is moving as a part of the plankton.

The Obelia reproduces both asexually and sexually. Asexual reproduction occurs when shoots of the hydrocaulus slip out from the colony, float away, attach and develop to a new colony.

The sexual stage of the Obelia is the medusa, developing as buds on the reproductive polyps. The medusa looks like a small jellyfish (3 mm in diameter). Initially, it is a part of the colony, but later it separates.

The Obelia does not have special organs for respiration and excretion.

Obelia is mostly carnivorous, feeding on small crustaceans and nematodes.

Similarities Between Hydra and Obelia

The similarities between the Hydra and the Obelia are as follows:

Difference Between Hydra and Obelia

Hydra is a solitary polyp animal.

Obelia is a colony of interconnected polyps.

Hydra does not have an exoskeleton.

Obelia is covered by yellow chitin exoskeleton, secreted by the ectoderm.

Hydra has up to 12 hollow tentacles.

Obelia has up to 24 solid tentacles.

The nervous system of the Hydra is a simple nerve net. The Hydra does not have sense organs.

Hydra does not have a medusa form.

Hydras are sessile animals, but the polyps are able to move and change their location.

Obelia’s colony is sessile, medusas are part of the plankton.

Hydras reproduce sexually by the formation of gametes. 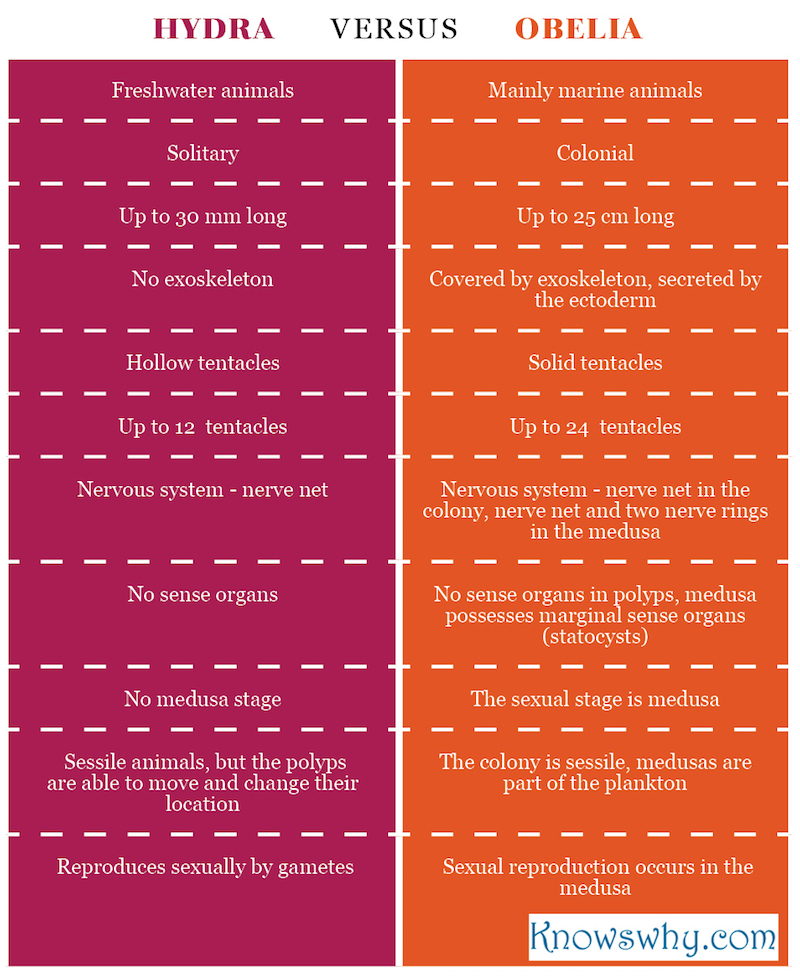