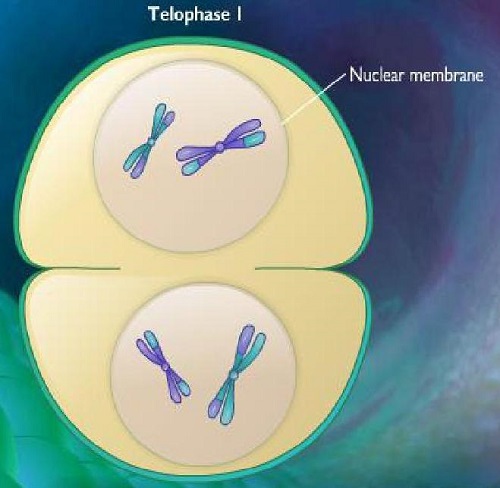 Meiosis is a special type of cell division where the homologous chromosomes in parental cells are halved to form haploid progeny gametes which fuse together at fertilization intitiating the development of a new organism.

It consists of two main nuclear divisions: meiosis 1 and meiosis 2.

It is preceded by the DNA (deoxyribonucleic acid) synthesis phase where each chromosome of the homologous pair in the diploid nucleus is replicated into 2 sister chromatids.

Replicated homologous chromosomes get paired together along their length during a long prophase 1 forming tetrads. Prophase 1 ends with the breakdown of the nuclear membrane. Each chromosomal tetrad consists of four chromatids that exchange DNA sections at specific crossover points, insuring genetic diversity and serving to hold the tetrad together while migrating to the metaphase 1 plate.

During anaphase 1, the homologous chromosomes get separated and pulled by the contraction of the spindle fibres attached to their centromeres to opposite poles of the cell.

The next and last stage of meiosis 1 is telophase 1. At this point two daughter cells form by cytokinesis, each containing one partner of the chromosome pair, consisting of two chromatids. Cytokinesis or the division of the cytoplasm into two cells differs between animals and plants. In animal cells, the cytoplasm constricts in the middle forming a cleavage that separates the two daughter cells.

In plants, a cell plate forms in the cytoplasm and results in a doubled cellular membrane. In some cases, the nuclear envelope re-develops and a partial decondensation of the chromosomes occurs. Telophase 1 and therefore meiosis 1 are directly followed by meiosis 2, the second cellular division leading to the formation of the gametes. Telophase 2 is the last stage of meiosis 2, the second part of meiosis which results in haploid sexual gametes. Directly after telophase 1, the two daughter cells undergo another cellular division, meiosis 2.

It consists, similarly to meiosis 1, of four stages: prophase 2, metaphase 2, anaphase 2, and telophase 2.

Contrary to meiosis 1, meiosis 2 is not preceded by DNA replication. Additionally,  prophase 2 is quite brief and is simply characterized by the DNA recondensation into chromosomes and the dissolution of the nuclear envelope.

Since there’s no preceding DNA replication, there’s no  alignment of homologous chromosomes, the aim of this second cellular division being the generation of haploid gametes. The condensed chromosomes, each with its two sister chromatids, migrate during metaphase 2 to the metaphase plate in the equator of the cell. Anaphase 2 follows and the two chromatids are segregated and pulled to the opposite poles by the contraction of the spindle fibres attached to their centromeres.

Telophase 2, similarly to telophase 1, is the stage when cytokinesis develops following the separation of the chromatids. The result is four daughter cells, the sexual gametes, with a haploid DNA content (1 chromatid each).

During this last step, the cytoplasm divides in two and the nuclear envelope re-forms around the decondensing chromatids which are once again called chromosomes. Telophase 2 is followed by the maturation of the cells into gametes, either sperm or eggs.

Table: Difference between Telophase 1 and Telophase 2 A special type of cellular division, meiosis, occurs in order to produce haploid gametes which fuse together during fertilization into a diploid cell, therefore developing into a new organism.

Meiosis is characterized by two consecutive cellular divisions, meiosis 1 and meiosis 2, divided into four stages each. Telophase 1 and telophase 2 constitute respectively the last stages of meiosis 1 and 2. While both present a similar process consisting mainly of cytokinesis and the separation of the parental cytoplasm into two new distinct cells with distinct nuclei, telophase 1 and 2 exhibit a number of important differences: