What does ‘Endocrine System’ mean?

The human endocrine system encompasses a wide variety of glands which secrete hormones directly into the blood, which are, in turn, delivered to the right cells and organs.

In order for an organ to receive the hormone, it needs to have a receptor cell, which has certain proteins in its membrane, allowing it to “recognize” the hormone and take it in, instead of seeing it as a potentially dangerous body and rejecting it.

The main gland that controls the secretion of almost every other hormone in the body is the pituitary gland, located just underneath the brain. It signals other glands, such as the thyroid, parathyroid, adrenal, pineal or reproductive. 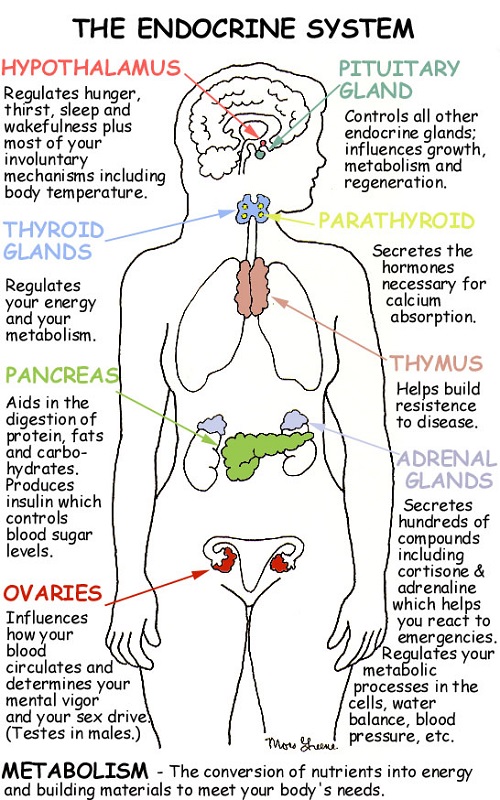 Once it signals them to start secreting hormones, those hormones are then further directed at a certain organ. If the hormone level is too high or too low, another hormone will be secreted, signaling the pituitary to stop sending signals to secrete said hormone.

The axis follows something called the “negative feedback mechanism”, a very stable mechanism that is often implemented in electronics and software engineering, and it follows a simple principle – as soon as the level of something, in this case the hormone, is too high or too low, a signal is produced which either increases or decreases the production level of that hormone.

What does “Nervous System” mean?

The nervous system is another “control hub” of the human body (along with the endocrine system), spanning a wide network of neurons throughout the body, which transmit messages between the brain and other parts of the body.

These messages are basically electrical impulses which travel over the cell membrane, from one neuron to another, ultimately reaching its destination. The passage of the signal between two neurons is made easier by the existence of neurotransmitters, chemical compounds located at the junctions between two neurons, which facilitate the signal transmission. The signal can go in two directions: either from the brain to the target body part (for example, you want to grab a tasty-looking pie, so the brain sends signals to your hand to reach out and grab a piece), or from a body part to the brain (that piece of pie you just grabbed was much hotter than you expected, so your skin cells send signals that they’re being damaged).

Similarities Between Endocrine and Nervous System

These two systems have several things in common, listed below:

Homeostasis is the state of “inner balance”, a stable equilibrium in the complex system of human organs and tissues, dictated by various physiological processes. Both the nervous and the endocrine system serve to preserve that equilibrium.

The endocrine system through hormones, the nervous through electrical signals, they both dictate how other parts of the body will function.

It’s never a good idea to have either too many or too few hormones or neurotransmitters. Their lack or abundance is dictated by various diseases or drugs.

Similarities Between Endocrine and Nervous System at a glance

Both the endocrine and nervous systems are crucially important parts of the human body, which are devoted to preserving homeostasis, or inner equilibrium. They’re heavily interdependent, as they both fulfill the same purpose, although through different mechanisms – sending and receiving messages in the human body. There are several other similarities as well, most notably the fact that both systems are regulated via the negative feedback mechanism.