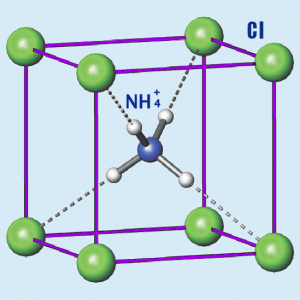 Why is NH4Cl ionic?

Ammonium chloride (NH4Cl), in its outward appearance is like a pure white crystalline salt only made out of ammonia and are highly soluble in water. It is also known in other names as Sal ammoniac which is a natural mineral structure of ammonium chloride. Sal ammoniac can be seen on dumps of burning coals or most commonly in volcanic areas shaping up on volcanic rocks that are near smoke releasing vents.

Ammonium chloride is also produced commercially as a product of a chemical reaction between ammonia (NH3) and hydrogen chloride (HCl). This process can be seen when test tubes – or other containers with nonreactive materials like glass, PVC, enamel and lead – containing ammonia solution and hydrochloric acid are brought closer together, it then creates a smoke that slowly rise out of the tubes containing micro crystals of ammonium chloride.

NH4Cl is formed through ionic bonding. Ionic bond is a kind of chemical bond that is formed through electrostatic attraction connecting two ions with opposite charges or between a cation and anion. While Chlorine (Cl- that is an anion) lacks a single electron to complete its valence shell, ammonium (NH4+ that is a cation) provides the missing electron that the chlorine needed and forms an ionic bond between the two.

In a way, NH4Cl is not formed through a pure ionic bond this is because NH4+ is a product of a covalent bond existing in the ammonium ion between the atoms of nitrogen (N) and hydrogen (H), in addition to the existing one coordinate covalent bond which is formed between one hydrogen atom and nitrogen. However, nitrogen still has an outstanding single electron that is transferred to the chlorine (Cl) thus resulting to an ionic bond. In this notion, ionic bond is the transference of electrons to connect with different atoms, while covalent bond is the sharing of electrons.